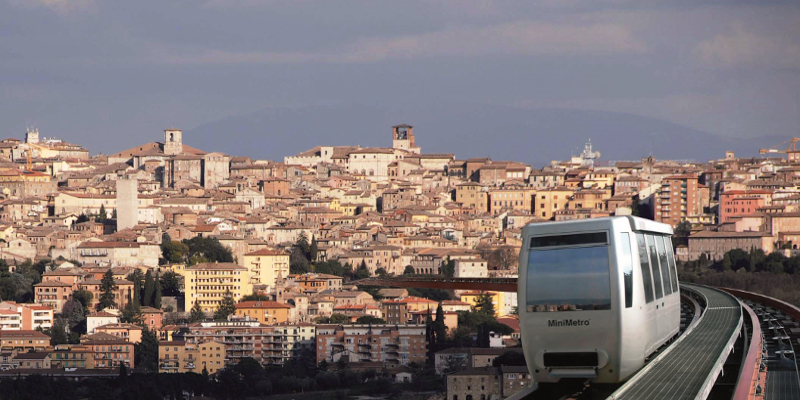 The Minimetrò® of Perugia is a urban public transport system, made up  of an automatic cableway transport. The system is very unique, in some ways unique in the world, because unlike many other similar systems, in addition to the two terminal stations, has no less than five intermediate stations. The circulating cars,   which can reach up to 27, are equipped with a sophisticated automatic coupling system that allows them to make stops in several stations becoming uncoupled and linking up with the haul rope that stays in motion. 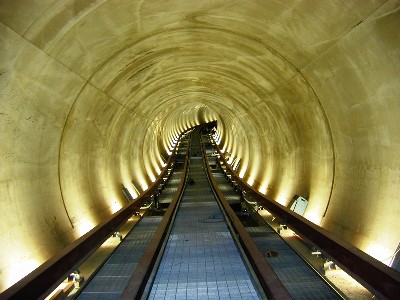 The system operates in a fully automatic manner; This would normally mean that the vehicles and in stations there is not a staff to operate them. There are only some operators in the central control room (the room is placed above the terminal station Pincetto) who have the task of monitoring the proper functioning of the system.

The plant has been realized by Leitner S.p.A. and Umbria Tomorrow S.C.a.r.l. (Civil works) with the help of Siemens S.p.A. who provided the automation system and electrical drives; all on behalf of the Company Minimetrò S.p.A.

T & T Systems, with its HINTSW Division, participated in the project as a subcontractor to Siemens S.p.A.

The automation system, has the task to manage in a fully automatic all handling operations (from the winch management which actuates the towing cable, to the stop at the station of the cars, to their correct spacing along the entire route ...) and it has the task of constantly monitoring the system, the vehicles and the stations.

The construction features of the Minimetrò® are such that if there was not an suitable  safety system, the system would present considerable risks for the safety of users, in fact the cars are not motorized and are without braking system; The route has strong descents (up 11.5%) and, as mentioned, there is not operating personnel, either at the station or on the cars.

The haul rope of the plant, as previously reported remains in constant motion, while the cars, to make the stop at the station will automatically disengage from the rope by means of a sophisticated mechanism (patent S.p.A. Leitner). The car, after being uncoupled, is slowed down by a series of rubber wheels placed on the two sides of the track (the so-called slowdown beam) up to the stopping point where it is stopped. 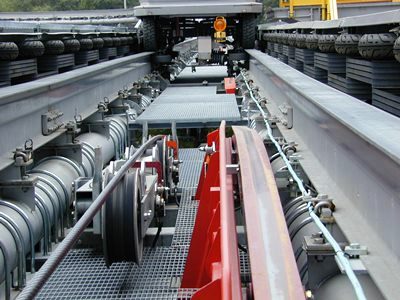 The car must stop with accuracy because the car door must be aligned with the dock door to allow the smooth  boarding and alighting of passengers . The dock door is an important safety device as it prevents the accidental fall of people on the underlying train tracks.

After a predetermined dwell time, which can vary depending on the needs of the moment, the car, through a further series of rubber wheels placed on the two sides of the track (the so-called beam acceleration), is accelerated until it reaches a synchronous speed the speed of the towing cable; at this point the car vices the rope and continues its path to the next station.

All the described sequence, from the  de-vicing of the car from the rope, to its re-vicing after the stop at the station, is managed by the automation system of each station. Each station has its own stand-alone automation system which, however, must be coordinated by a further centralized automation system that operates at a higher hierarchical level. This is necessary, for example, because the system, by varying the dwell times of the cars in the various stations, must be able to maintain the cars properly spaced between them, but also to carry out the emergency stop of the plant to against any dangerous situations or anomalies, or, more simply, to be able to vary the speed of the hauling cable, while maintaining the synchrony between the reference speed of the rope and that of the beams in the various stations. 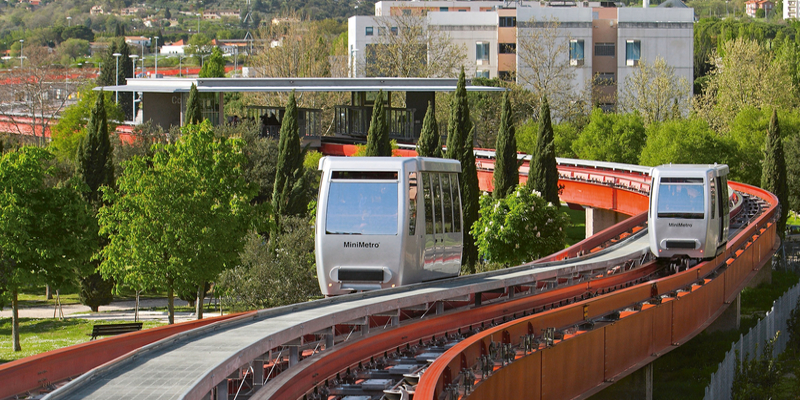 The centralized automation system, moreover, must be able to handle the cars transfer to / and from the warehouse placed under the Pian terminal station Massiano (for example in order to replace any cars failed), must be able to monitor continuously the position of the cars on the route and their operating status: lighting, ventilation, presence of alarms, any passenger calls, etc ... 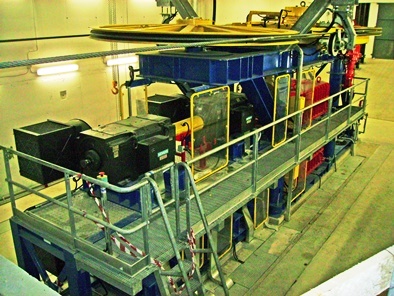 The winch is equipped with two main drives in mutual reserve, each from a total of 900 KW. Each main drive consists of two digitally controlled AC / DC converters from 1600 A DC each, and two DC motors from nominal 540 KW each. The main drive serves also as service electrical brake.

In the event of a complete unavailability of the winch, the system is equipped with a "recovery" drive consisting of a three-phase asynchronous motor, which, by means of a hydraulic pump and its circuit, drive a hydraulic motor engaged on the driving pulley with a power output of 130 kW. The task of this drive is to "retrieve" all the cars online and bring them to the different stations of the plant, so as to allow the passengers to descend and thus complete the evacuation of the plant.

The Minimetrò® safety system is not, in the strict sense, a stand-alone system but is part of the automation system and consists of a programmable electronic system based mainly on Siemens's fail-safe family PLCs, and on  "fault-tolerant" S7-400H

All the parts of the safety-related automation system have been designed in accordance with the SIL 3 level specified in IEC 61508, both for electronics and software. 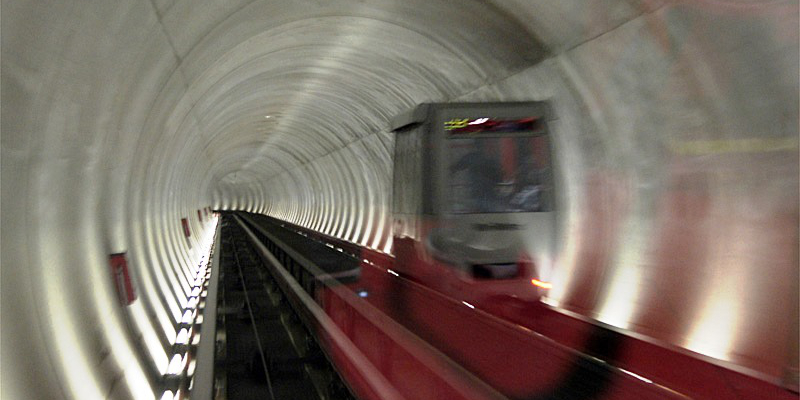 As mentioned above, the automation system as a whole is composed of several systems that are placed on two different levels of hierarchy: at the lowest level there are the automation systems of individual stations, warehouse, and other specific parts of the Plant; Then, at the highest level, there is the central system that coordinates the entire activity of the plant through the main interface to the SCADA operators, and with their communication networks. 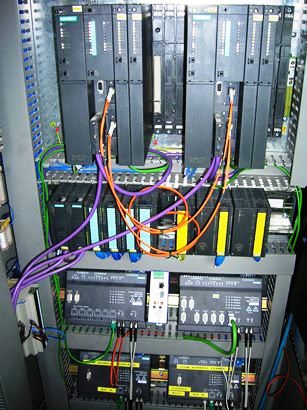 With regard to station automation systems, the most critical tasks for passenger safety are to avoid collisions between cars (for example, between a car arriving at a station with another car already stopped in the station); to avoid collisions between car and beams due to asynchronous rope / beam, beam / beam speeds; the control of the dockside; lacking or incorrect vicing. In particular, this latter point is considered to be very critical: each station is equipped with an emergency brake,  the task of which is to lock the car before it leaves the station, if any anomaly is detected in vicing the car to the rope.
The central automation system contributes to the safety of the plant and of the passengers as well. The main function that this system has to handle safely is the control of the winch: its startup, stop, speed regulation and various surveillance (motors, kinematic chain, service brake, emergency brake, etc.). .). In particular, in the event of mild abnormalities, the speed of the winch (and therefore of the rope) must be able to be reduced below certain safety thresholds, or, if the abnormality detected is serious, the automation system must stop the system by stopping the winch.

The winch stop, depending on the condition and severity of the anomaly, can take place through the service brake (electromechanical stop) or by the emergency brake (emergency stop). There are many and various  situations that can cause the plant to stop:  failures of the sensors placed on the mechanical parts of the track (all the physical components of the system are continuously monitored and diagnosed),  failures on communication networks,  risks of collision of the vehicles,  failures of electronic computers, various hazard situations that can occur at stations. 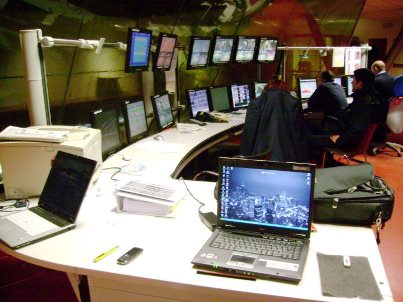 The centralized automation system is also entrusted with some very important services for the safety of travelers such as the handling of alarms related to the opening of the emergency doors of the vehicles, the signaling of failures and / or anomalies to the onboard car systems , the loss of communication between the ground and the car, the management of the correct opening and closing of the car door, the management of failures and/or anomalies to the ground technology plants, the monitoring of the correct interaction and communication between the various automation systems of the plant.

Taking into account the above description, it is manifest that the complexity of the system and therefore the importance of all the functions set up to make the Minimetrò system safe. The functional safety of the plant is indeed a major challenge, both in technical and management terms, and in fact includes many aspects. Many elements of this challenge have been resolved during the design phase of the system, but keeping an adequate level of safety is a task that is renewed day by day.
T & T Systems was actively involved  in the Minimetrо® system design phase for the system's secure parts by applying its capabilities, especially in the application of Standard IEC 61508, and for some parts of standard automation. The following article , "The Minimeter & HINTSW", describes in detail the activities carried out by HINTSW - T & T Systems. 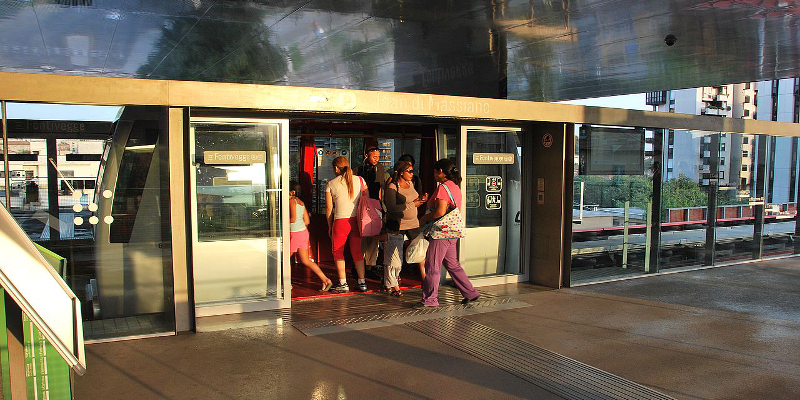